Introduction
Binder phenotype with stippling results in hypoplasia of the nasal pyramid (also called maxillonasal dysplasia).If other anomalies are visible, the risk that Binder syndrome is part of another syndrome is high.
Curry et al.in 1993.first published the association between Chondrodysplasia punctate (CDP)with characteristic Binder’s phenotype and maternal autoimmune connective tissue disorder.
Mixed connective tissue disease (MCTD) is characterized by high titre antibodies to U1-ribonucleoprotein (RNP).Even thoughCDP fetuses,which are associated with maternal autoimmune disorders, have a comparatively better prognosis, the inability todifferentiatethis underlying causeon the part of the clinician may result in an unnecessary termination of the pregnancy.
CASE REPORT: Relevant history and Clinical findings 28-year-old primigravida booked at six weeks of pregnancy.She was a known case of mixed connective tissue disorder with Anti Ro, Anti Sm and U1RNP antibody positive and was on Hydroxychloroquine, Azathioprine and steroids fortwo years.She was in remission and was seen preconceptionally andcounselled about the condition.She was being jointly managed with the rheumatologist.Her first-trimester screening was normal.

Diagnostic assessment: Second-trimester anomaly scan done at 19 weeks showed Binder’s Phenotype with stippling of the epiphysis of long bones and coccyx with suspicion of Chondrodysplasia punctata in the fetus.

Intervention: The patient was counselled that she needs further evaluation with anamniocentesis and microarray/exome.However, she opted to continue the pregnancy without invasive /genetic testing.In the backgroundof MCTD, the possibility that this fetus had CDP was high.

Follow up: Her maternal condition remained stable
She was followed up with mechanical PR interval monitoring for the diagnosis of AV block because of her Ro, La positivity.Follow up scan done every fortnight continued to show the bony stippling (femur epiphyseal and coccygeal stippling )but did not show any progress of the lesion. 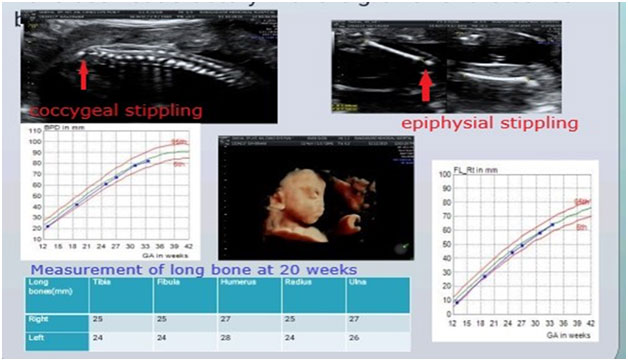 She delivered a baby of 3kg by c section.Post-delivery scans did not show any additional anomaly.

DISCUSSION
Review of literature
The concept of MCTD as a separate immune-mediated connective tissue disease was first introduced by Sharp et al.2>40 years ago, but there is still no consensus regarding the disease definitions, classification, criteria or the relationship with autoimmune conditions.MCTD may begin with any clinical manifestation associated with SLE, systemic sclerosis, polymyositis or rheumatoid arthritis at the initial presentation or during the clinical course.

The anti-U1-RNP antibodies are the hallmark of the disease.Patients with high titers without any criteria of MCTD or other defined connective tissue disease usually evolve into MCTD in about 2 years, and affected womengave birth to neonates with CDP.However, it remains a diagnosis of exclusion.

The differential diagnosis was outlined by Chitayatet al. 1. The diagnosis, especially in fetuses, relies on the clinical and imaging manifestations and should include a thorough investigation to exclude skeletal dysplasia,chromosomal abnormalities and inherited conditions such as peroxisomal disorders, arylsulfatase A and Smith–Lemli–Opitz using chromosome analysis, metabolic studies, DNA analysis and if neededwhole-exomesequencing.

Anti RNP antibodies have been described in the mother Schultzet al. 3 This observation suggests that the transplacental crossing of anti-RNP or possibly another as yet unidentified antibody mediates CDP.
The most common facial findings include midface hypoplasia with a poorly developed nasal bone and creases over the alae nasi and some malar flattening, similar to that seen in fetuses exposed prenatally to warfarin.Intellectual development seems unaffected in these cases, although long-term follow-upis lacking to confirm this observation.

Strength and limitations:
Chromosomal analysis, including microarray and further evaluation, was needed to conclude that the Etiology is maternal MCTD which was not done in our case.

Takeaway lesson:Chances of the fetus being normal is very high if MCTD causes CDP in the absence of other congenital anomalies.The needfor amniocentesis with chromosomal microarray and Whole exome sequencingto rule out genetic causes must be highlighted in counselling.ANA testing is suggested in the workup of a mother with a fetus havingBinders syndrome when the mother has not been diagnosed with autoimmune diseasesas isolated Binder’s syndrome has a good prognosis.

Good maternal and fetal outcomes can be achieved in connective tissue diseases with appropriate multidisciplinary care with live birth rates as high as 72%, especially if there are no associated co-morbidities.

The patient gives informed consent to publish the case and theimages shown above.